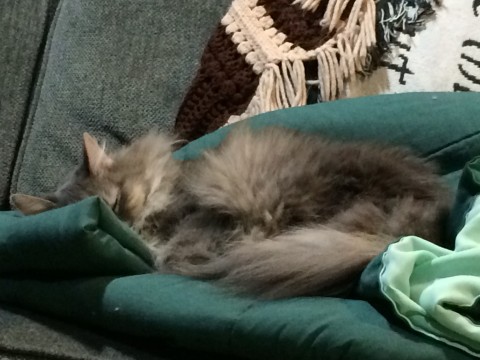 Have you ever watched your cat as he slept? Did he ever twitch, or even chirp or chatter, in his sleep? You might have wondered what it is he’s dreaming about, or if cats dream at all. According to Purina, scientists have studied the brain activity of rats performing certain tasks, and then sleeping. They discovered brain patterns at certain points in the rats’ sleep matched some while they were awake, so it’s likely that all mammals dream to some degree.

What is it that cats dream about?

Below is a video of Chase dreaming. When our cats dream, they’re all different, and he’s probably our most active. He’s even woken me up in the middle of the night by kicking me in his dreams. Sometimes he chirps in his sleep, and every so often, he’ll jump wide awake, as though he’s had a nightmare.

When Chase and Kali were kittens, I had Kali with me on the couch, asleep. Suddenly, she jerked awake, glanced at the fireplace with wide eyes, and then disappeared under the TV cabinet. After 15 minutes, she gingerly poked her head out, looked around, saw the fireplace, and scooted back under the cabinet. It was another 20 minutes before she actually came all the way out.

What was she dreaming about that scared her? There’s no way to know, because she can’t say. However, an article on the BBC says that it’s likely cats dream about what they do in their everyday lives: Stalking, pouncing, playing, chasing, you name it, cats dream it. Kali could have dreamed that something from the fireplace, or maybe the fireplace itself, came after her.

It’s also possible she didn’t have a nightmare, but rather, one of her twitches was so hard it woke her up, and she was startled and disoriented. There’s just no real way to know what our cats dream about right now. They’re fun to observe, and it’s fun to speculate about their dreams, though.