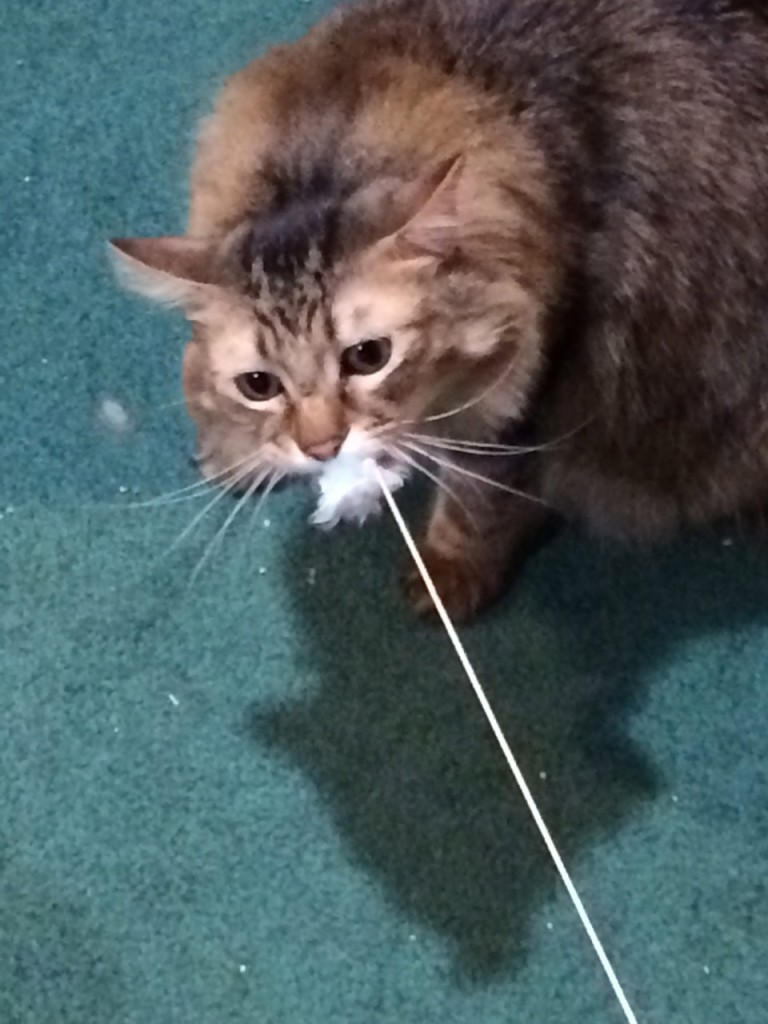 Why do cats bite ankles, and how do you get them to stop? Think about it. You’re walking through your house, minding your own business, when suddenly, a quartet of needles sink themselves into your ankle. You flinch, pull away, and maybe cry out in pain, because your cat has just sprung out of nowhere and decided that your ankle made a good piece of prey. What is the deal here?

What makes cats bite ankles in the first place?

Cat Behavior Associates says that cats bite ankles because they’re moving targets at about the right size for prey. Cats’ “prey drive” is triggered when things move across the floor, and if your cat doesn’t have much in the way of other outlets, he’ll go for whatever’s available.

When cats bite ankles, it’s a form of play aggression. Your cat may engage in other forms of play aggression, too. For instance, if he likes to chase you and bite your ankles, he might also go after your fingers when you’re relaxing on the sofa. Though it can sometimes be difficult to tell, there is a real difference between play aggression and real aggression. According to the ASPCA, if your cat is playing quietly and his mouth is half open, he’s playing, and not actually angry. Angry cats growl, hiss, and spit, and their tails lash back and forth.

Of course, when cats bite ankles, or any other part of you, they can still hurt you, even though they’re playing. They don’t know what “play gently” means. If you want to stop this behavior, there are some things you need to do.

The first thing you should do is provide some stimulating, interactive playtime for your cat every day. The best toy, according to Cat Behavior Associates, is a fishing pole type of toy, because you can best mimic the movements of your cat’s natural prey with these. These kinds of toys also keep a distance between you and your cat’s teeth, so it helps teach him an acceptable distance.

Another thing you can do is use a puzzle feeder, so he has to work for his food. Puzzle feeders give your cat progressively more difficult puzzles to solve before they’ll give him food, so he’s always engaged.

However, if you feed your cat a raw food or other diet that must be refrigerated, these might not work for you. What you can do, instead, is to divide his meals into smaller portions and hide them around the house, so he has to “hunt” for them. You can do this with treats, too.

The ASPCA also recommends frequently giving your cat new things to investigate. The easiest way to do that is to leave boxes out for a couple of days, instead of flattening them and tossing them or putting them away immediately. You can do the same with paper bags, and even your fabric shopping bags when you get home from the store.

It’s wise not to let your cat play with your hands or feet at all, because he’ll learn that they’re acceptable toys. Remember, cats bite ankles because they think they’re prey. Part of getting them to stop is teaching them that you are not an acceptable piece of “prey.”

Also, avoid yelling at your cat, or worse, swatting him, when he attacks you. This can actually encourage him to play even rougher, or it may upset him and turn his play aggression into real aggression. You also don’t want to make him afraid of you. You can, however, squirt him with a water bottle or a can of compressed air (not an air horn). In this instance, you do want him to associate the deterrent with you, so he’ll leave you alone.

Ultimately, cats bite ankles when they have no other outlet for their hunting instincts. It’s your job to ensure he has a sufficiently enriched environment, and sufficient acceptable outlets, for his instincts.

3 Replies to “Why Cats Bite Ankles, and How to Handle It”