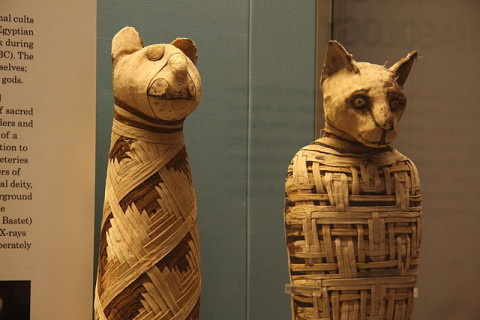 Thousands of years ago, Egyptian culture revered cats, to the point where people would pay good money to have a beloved cat embalmed and preserved. Cat mummies were quite common because of this. Now, Egyptologists and other researchers at the Manchester Museum and the University of Manchester have been studying some of these cat mummies, hoping to learn things about that ancient culture. What they found, however, was something completely unexpected.

According to a story on CNN, the researchers used a CT scanner and an x-ray machine to look inside the cat mummies, so they could see without harming anything. They discovered that much of the animal mummifying industry in ancient Egypt may have been a huge scam. One of the researchers, Lydija McKnight, says that they expected that not all of the mummies would contain what they expected them to contain. However, they were surprised to find that at least one-third of the mummies they studied didn’t contain any animal remains at all.

Even after all this time, the mummies should contain skeletons, at the very least. However, that ancient industry was so huge that fake mummies would have been inevitable. Selima Ikram, who helped curate an exhibit of mummified animals for the Smithsonian’s National Museum of Natural History, says that, in some cases, real animals were expensive and hard to find. If you wanted to offer an animal that you couldn’t actually get, you made a fake one.

Cat mummies were representations of gods

Egyptians were buying animal mummies as representations of their gods; the culture didn’t lend itself to the “you should get exactly what you buy” mentality the same way we do today. Cats, in Egyptian culture, represented Bast, one of the Egyptian goddesses, and also the one most closely linked to cats.

They could also represent Neith and Mut, and the god Ra sometimes took on the form of a cat. Therefore, it’s entirely possible, and even likely, that the “scam” wasn’t a scam at all. The fake cat mummies were not passed off as actual dead, mummified remains, but rather, simply as representations of gods and goddesses. McKnight says that the ancient Egyptians believed whatever was inside the mummy could be magically transformed. In that sense, they were getting what they paid for.

Still, it’s kind of odd to find out that these cat mummies might not actually contain anything at all.