A cat in the U.K. had to undergo emergency surgery for a huge lump in his abdomen that the vet found during a routine exam. It wasn’t a tumor or any other type of mass, though. This cat, named Garry, had a wad of shoelaces and hair ties in his stomach. Garry’s cat parent, Ana Barbosa, had no idea. Garry is a fine example of the fact that cats swallow string when they’re given the chance.

Ana had been losing shoelaces, and it never occurred to her that Garry might be eating them. He showed no signs of illness, so it was easy for her to assume that the laces were disappearing when she washed them. Garry is “a very cheeky little chap” who always preferred human things over cat toys.

Sometimes, cats swallow string because it sticks to their tongues, so it’s possible that Garry was playing with the shoelaces, and then swallowing them as they stuck to the little barbs on his tongue. 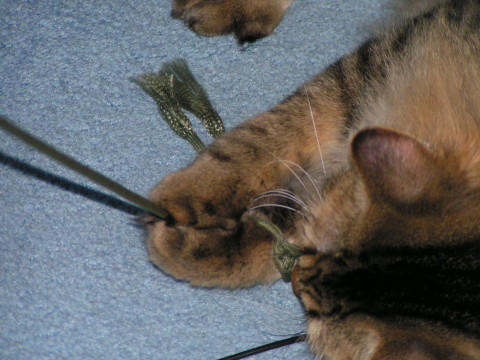 Chase swallowed a piece of fabric, and it caused massive problems

This is similar to what happened to Chase when he swallowed a piece of fabric off his toy. In that case, I was there and playing with him, and the piece of fabric was tied to the end of a homemade wand toy to make it easier for him to see. Cats swallow string, or string-like things, in any context, even when they’re playing, and Chase was no exception.

Chase loves playing tug of war, but that fabric wasn’t especially strong. He broke two-inch long piece off and swallowed it before I could get to him. Up until this happened, it didn’t occur to me that cats swallow string, fabric, or anything else quite that easily. I hoped he would pass it, but he didn’t, and it ended up causing a blockage. I noticed his appetite seemed poor a week or so later, but it wasn’t until I noticed he had lost serious weight that I took him to the vet.

At the vet’s office, they diagnosed a blockage, and I signed paperwork for emergency surgery. However, they kept him overnight, without doing the surgery, and he passed the fabric. We took him home, hoping he was fine.

It turned out he wasn’t. When he passed that piece of fabric, it destroyed all the normal flora in his GI tract, and made him very sick. I was back at the vet’s a week later, where she thought that the fabric might have caused a rupture when it traveled through his system. This time, they did open him up. They didn’t find a rupture, but they did find the infection. He was hospitalized for ten days, on fluids and massive doses of antibiotics. 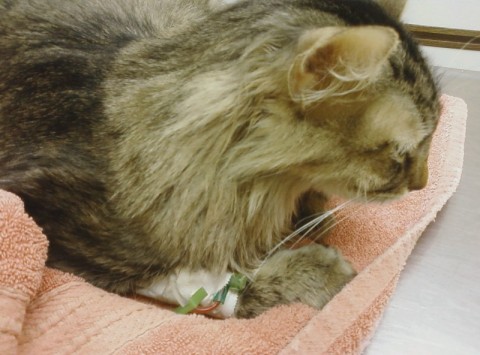 Cats swallow string all the time, so it’s unwise to leave them alone with it

Chase is fine now, and Garry is, too. However, both situations illustrate some of the problems that can come when cats swallow string. Ana didn’t see Garry eating her shoelaces at all, but he must have had unsupervised access to them to eat so many. With Chase, I was only half paying attention, and wasn’t aware he could break the fabric until I felt it snap. That’s why I couldn’t get to him in time to pull it from his mouth.

It’s possible that Garry saw the shoelaces, started playing with them, and as they stuck to his tongue, he just swallowed them because it was easier. The little barbs on cats’ tongues face backward, into their throats, and is one reason why cats swallow string so easily.

It’s also possible that Garry has pica, and was eating the shoelaces because of that. Pica is a condition in which people, or animals, crave and eat non-food items. Pica can result from dietary deficiencies, medical problems, genetic predispositions, a compulsive disorder or environmental factors. Your vet can help you determine why your cat might have pica. It’s not clear whether Garry has pica.

It boils down to this, though: It’s not smart to leave your cats alone with string-like objects, nor use string as a toy unless you’re paying very, very close attention. Cats swallow string when given the chance, which can ultimately cause all kinds of problems.

2 Replies to “When Cats Swallow String, You Need to Worry”