Cats get upset tummies just like we do, and, just like us, if the problem is bad enough, they throw up, or get diarrhea, or both. When a cat vomits, or has diarrhea, once in awhile, then so long as he’s still eating, drinking, and behaving normally, it’s probably nothing to worry about. However, if your cat vomits repeatedly, has diarrhea that won’t stop, and/or seems lethargic and doesn’t want to eat or drink, you should definitely make an appointment with your vet because that’s serious, and your cat needs medical treatment.

Sometimes, a cat vomits because he ate something he shouldn’t have

When your cat vomits after he’s eating something he shouldn’t have, it’s because it’s irritated his sytem. This happens with Kali sometimes, despite our best efforts to keep things that make her sick out of her reach. One time, it was garlic skins in the trash can, which I thought were safe from her. Another time, it was licking a pillow I’d lightly sprayed with Zero Odor (I have no idea why she likes that stuff; I have to shut the doors to the rooms I spray until everything is dry because of her). 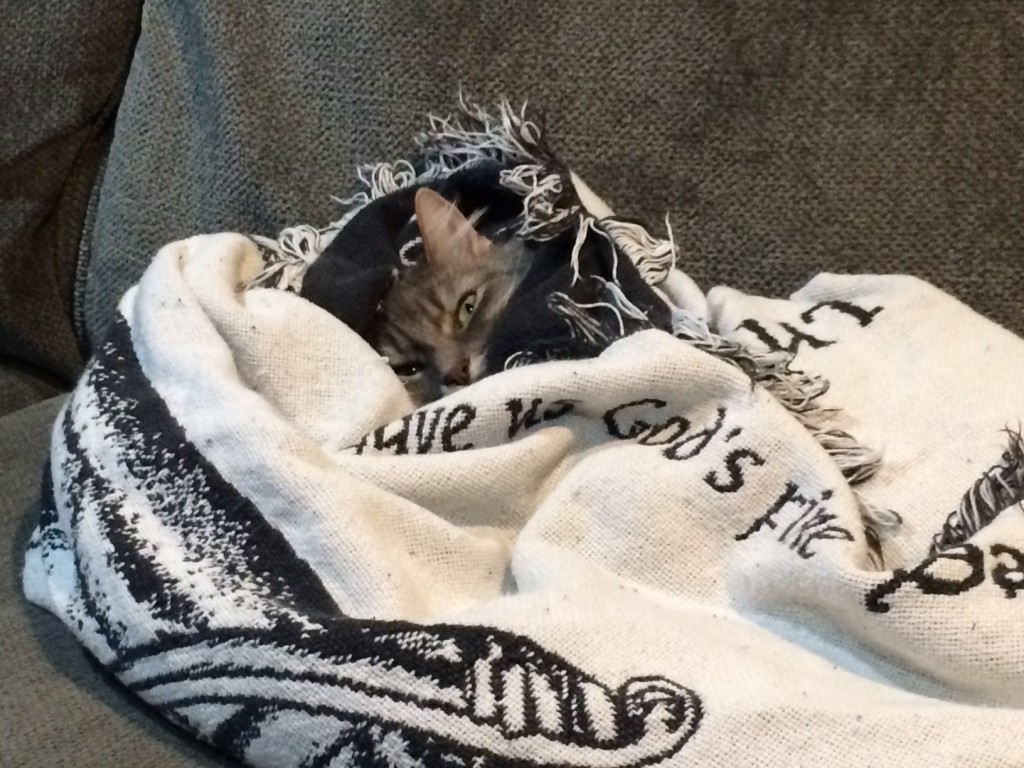 When Kali makes herself sick, she usually vomits several times, and whether she also has diarrhea depends on just what she got into. Sometimes she vomits just once or twice, and she’s fine. Other times, she vomits all night and well into the next morning, and has several episodes of diarrhea, too. I usually don’t get a lot of sleep when this is the case, because I keep her with me so I can gauge just how sick she is. Then I decide whether to call the vet.

When your cat vomits, there are ways you can help him at home

When a cat vomits here, more than once, whether it’s Kali or any of our others, the first thing I do is take away all food and water. The food part isn’t hard, because our cats are only fed twice a day. So if it’s close to mealtime, I’ll withhold her meal. According to Petplace, this gives her system a chance to fully get rid of whatever’s making her sick, and also to calm down.

If she doesn’t vomit again after about two to three hours, I’ll give her a little bit of water, and see how she does. If she’s able to hold it down, then I give her a little more water after another half hour or so. If she vomits either of these times, I consider calling the vet, depending on her behavior.

If she does hold the water down, I’ll give her full access to the water bowl again. I withhold food for a minimum of six hours, and usually twelve, depending on how sick she seems. If she’s holding water down just fine, then after six hours of no food, I’ll boil up a piece of plain chicken breast for her, cut it into Kali-sized bites, and give her a few, just to gauge her interest.

If she’s not really sick, and she’s just had an irritated tummy, then by this point she’s usually interested in the chicken and will wolf it down. That’s why I give it to her slowly; she’s hungry, so she’ll try and wolf her food down, which can start the whole cycle over again. 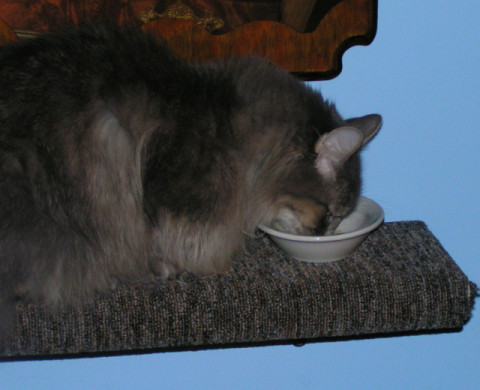 Kali’s also had diarrhea, which was especially bad the time she got into the trash and ate the garlic skins. She didn’t have enough of them to have a toxic reaction, but they did irritate her entire GI tract. When she has diarrhea, after I’ve gotten her interested in food again, I try and feed her a little bit of canned pumpkin (not to be confused with pumpkin pie filling). The fiber in the pumpkin helps to firm up loose stools, and can stop diarrhea fairly well. Be careful, though. Too much can make your cat constipated, which obviously won’t help him get better. I usually only give Kali half a teaspoon, or maybe a full teaspoon, which is what Life With CH Cats recommends.

When none of this works, and it’s been more than 24 hours since any of our cats started vomiting and/or having diarrhea, we call the vet. Vomiting and diarrhea can be symptoms of something quite serious, and as with any health problem, the sooner it’s diagnosed and treated, the better the outcome. So if your cat vomits, and/or has diarrhea, and either can’t keep water down, or it doesn’t stop after 24 hours, you need to call your vet and get him seen.

One Reply to “Ways to Help When Your Cat Vomits”