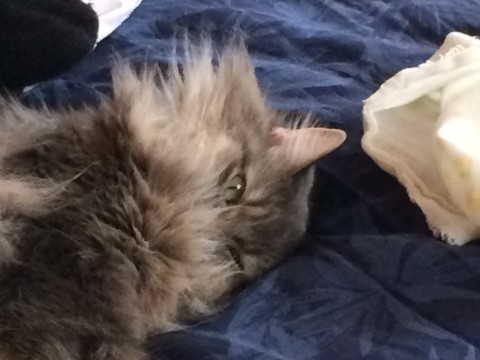 The primary study mentioned in a recent article in the Washington Post found that cats really like being pet on the head. This is especially true of their faces; where cats like being pet the most is their cheeks, chins, and even their mouths; all these are their favorite places for things like tiny, soft strokes and small scratches.

We can definitely see that in our own cats; when they want attention, it’s their faces they rub on us. Kali, Chase and Aria will all rub their cheeks and foreheads on us, and they love chin scratching. Gizmo is kind of an outlier, because her favorite place to be pet is right on top of her head. She headbutts, but she doesn’t really rub her chin and cheeks on us.

One possible reason that this is where cats like being pet the most is because this is where a lot of their scent glands are. They could be wired to enjoy having those areas touched and pressed to encourage them to frequently spread their scent. Cats have scent glands elsewhere, too, like in their paw pads, which is one reason why they scratch posts, furniture, trees, and more. Anything to mark their territory as thoroughly as possible.

The Washington Post article says that cats consider their backs as “meh” petting territory. They also consider their paws and flanks as “meh” territory. I don’t know about your cats, but Chase, Kali and Aria love having their backs pet and scratched. Gizmo, again, is the outlier here. In fact, I’m pretty sure Kali walks away from her bowl in the middle of a meal for the sole purpose of making me scratch her back. She is one cat that definitely doesn’t consider her back to be “meh” petting territory.

Stroking all four of our cats along their backs makes them sleepy, when they’re in the mood for attention. It’s relaxing to them. One thing that the researchers put forth is that cats think of petting as a type of grooming activity, which is calming and reassuring for cats.

Places where cats like being pet do not include their tails, or more specifically, the bases of their tails. The researchers who conducted the study found that the base of cats’ tails is very sensitive, possibly because it’s an erogenous zone. Petting or scratching the base of the tail might overstimulate the area, so they don’t like it. Aria certainly doesn’t like it; she starts mewing in protest whenever we touch the base of her tail. 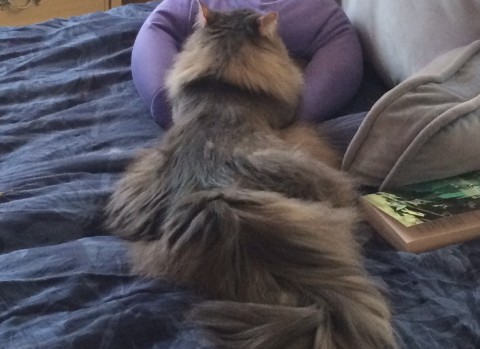 Despite all this scientific research, where cats like being pet the most may come down do how they were socialized, what kind of grooming they received as kittens, and what kind of attention they get at home. For each of our individual cats, the best way to determine where they like to be pet is to study their behavior, and their reactions, when you pet different parts of their bodies.