This article has been republished from my column on Examiner.com, with some alterations

Caring for abused cats and kittens is difficult and often frustrating, because these cats are extremely skittish and exhibit defensive behavior. It’s easy to interpret this behavior as anti-social and vicious, but the truth is that the cat fears people and is anticipating an attack when people approach her. 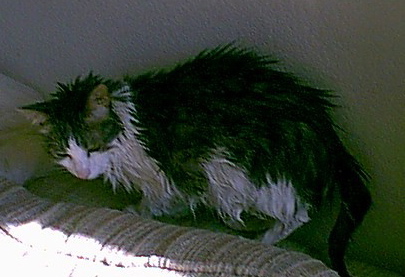 Kitty, just after a bath.

Kitty: My own experience in caring for abused cats

I had the honor, and the difficulty, of caring for just such a cat. Kitty came to our home when I was 14 years old, and she was thought to be about a year old. The people from whom we adopted her said that she was vicious, and they couldn’t handle her. It turned out that she wasn’t vicious, she was defensive.

The most obvious sign of abuse was her tail. At some point, it was broken, and she never got veterinary care for it so it healed badly, at a roughly 90-degree angle, not too far from the base. She had some use of it, could move the tip a little bit, and didn’t seem to be in pain from it, so it didn’t need to be amputated.

Other signs were not as obvious, but very much there.. She was very, very skittish and timid. She hid all the time. She hid in the bookshelves, up on top of the cabinets in the laundry room, and in closets if she could get inside. She even disappeared for three days; we later discovered that she’d clawed a hole in the thin material on the bottom of the box springs in my father’s bed, and was hiding up there.

If you cornered her in any of these places, or anywhere else, she would cower. If you reached for her, and she had nowhere to run, she would lash out. We often had to wear ski gloves or oven mitts when catching her, because she would bite and claw dangerously hard. I have scars from her teeth and claws that I got through the gloves I wore. This was self-defense though; she had no idea what you were about to do to her.

When I moved out at 18, I took Kitty with me, because our other cats beat up on her and she’d never crawled out of her shell. Once she was alone, and had a place to herself where nobody was going to harass her, she really blossomed. There were things I had to be careful about, like making sudden moves near her. I also had to accept that she would never be a lap cat, and that I couldn’t just pick her up and cuddle her whenever I wanted to. 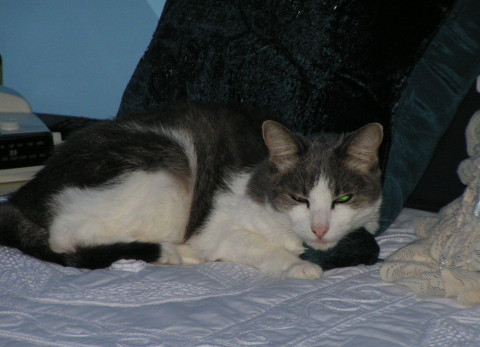 She died in 2006, at the age of 15 years, from congestive heart failure. I like to believe that we gave her as good a life as possible, especially under the circumstances.

Consider these tips when you’re caring for abused cats

I learned a lot from caring for Kitty. Here are some tips you can use for caring for abused cats and kittens:

Keeping these tips in mind will help when caring for abused cats and kittens. These poor animals need to be loved, and need to be made to feel comfortable around people.