Is your cat microchipped? Even indoor cats should have microchips, in case they escape and get lost. Microchips help vets and shelters identify your cat, even if she doesn’t wear a collar, or her collar went missing. Also, the chance that you will be reunited with your lost cat increases greatly if she’s chipped. But is it really that simple? 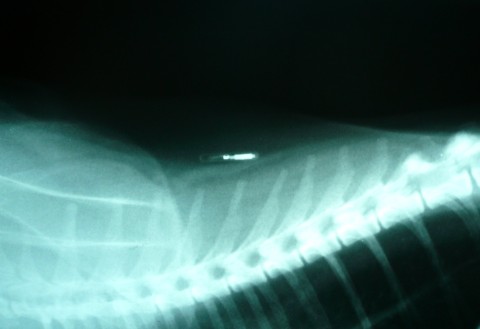 Image by I, Joelmills. Licensed under CC BY-SA 3.0 via Wikimedia Commons

What kinds of microchips are there?

For the most part, yes. AVID® and Home Again® are the two most popular brands of chips out there, according to an article on Petplace. They both operate at 125 khz, and the scanners available can read chips from both companies because of that. However, when Banfield® started selling microchips, they operated at 134.2 khz. So most scanners couldn’t read those chips.

A different article on Vetstreet goes into a little more detail on that problem. The rest of the world uses chips that operate at 134.2 khz, too. So, for a long time, pets that got lost internationally were generally lost forever, in part because European vets and shelters couldn’t read U.S. microchips.

There have also been a few lawsuits over the matter, because shelters using one scanner have euthanized pets that had chips that worked on the other frequency. According to the Petplace article, Banfield® has stopped selling those microchips, and Home Again® has started selling universal scanners that read chips at all frequencies.

Another problem that can come with microchips, according to the Vetstreet piece, is that they can fail. Microchips don’t have their own power source, so you don’t need to worry that your cat’s chip will fail because it ran out of juice. Chips are only activated when someone passes a scanner over them, and they transmit a unique number back to the scanner. The rest of the time, they’re dormant, but it is possible for your cat to receive a faulty chip, or for the chip to just fail for some inexplicable reason. Because of this, it’s a good idea to have your vet scan your cat’s chip at her annual exam each year.

Can microchips cause cancer?

One other concern is whether microchips can cause cancer. The Irreverent Vet of Petplace says that they just don’t know right now. Vets and shelters usually implant microchips between the shoulder blades, but some shots go there, too. In some cases, those shots can lead to sarcomas. When the tumor’s removed, sometimes the chip sticks to it. However, they haven’t been able to figure out if the chips in these cases caused, or contributed to, the cancer.

In general, microchips are safe, and they greatly increase your chances of seeing your cat again if she gets lost. So get your cat chipped if you haven’t yet, and make sure you send your information to the company that made the chip. Also, remember to update your information when it changes, so that if she gets lost, the vet or shelter she’s taken to can contact you and let you know they have her.