Ever wonder what is up with cats and catnip? We have catnip pillows and catnip toys in our house, and we give our cats fresh catnip sometimes. They react the same to all of it – rolling and writhing on the floor, rubbing their faces on the catnip, and generally acting as though they’re high. The only cat that doesn’t is Aria, but she will eat catnip if she can. If your cats also react like this to catnip, you’re in good company.

Scientists don’t know exactly why cats react to catnip the way they do. They know that part of what happens with cats and catnip has to do with a substance called nepetalactone, but what, specifically, it does, remains a mystery. However, Dr. Karen Becker wrote a column in The Huffington Post, which cites what Dr. Nicholas Dodman, of Petplace, believes happens. 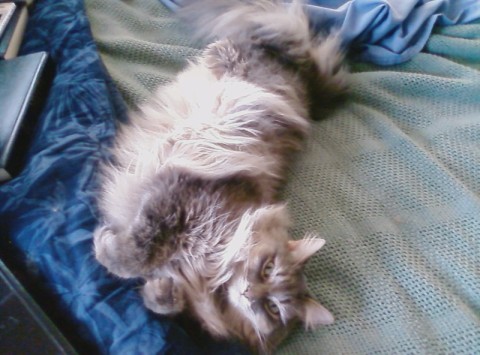 The fun with cats and catnip is a chemical reaction

Dr. Dodman thinks that catnip stimulates the areas of the brain that deal with hunting, hunger, and mating behavior. He says some of this is evident in the playful behaviors that cats exhibit when in the presence of catnip, and in the fact that cats might even start drooling in response to catnip.

According to the Humane Society, some cats even get aggressive when in the presence of catnip.

The “interaction” between cats and catnip lasts about ten minutes, although it can be shorter or longer depending on each individual cat. The Human Society says it can take up to two hours, though, for your cat to fully “reset.”

The Humane Society also says that not all cats react to catnip. It’s an inherited sensitivity, it seems, so if your cat didn’t get that gene, then she won’t react to catnip no matter how strong it is. In fact, only about 50 percent of all cats will react to catnip (although in my house, it’s 75 percent).

Cats and catnip can lead to greater harmony in your home

Some research suggests, according to Dr. Becker’s piece, that catnip may help improve the relationship between cats. Catnip can stimulate the pleasure centers of cats’ brains, which can help de-stress them. This, in turn, can help cats get along better.

Catnip is non-toxic, and non-addictive, so even if your cat likes to eat it, the worst that will happen is she’s unable to digest it and throws it up. Because of this, there’s no reason not to give your cat all the catnip you think she wants. Who knows? It could improve playtime with her, which could help strengthen your bond.