Ever heard of Lykoi cats? They’re a newly recognized breed of cat that looks a little like, well, a werewolf. Their fur is thinner and stringier than that of regular domestic cats, and their faces are narrower. They’re wholly, creepily cute and adorable, and Lykoi cats are becoming quite popular. 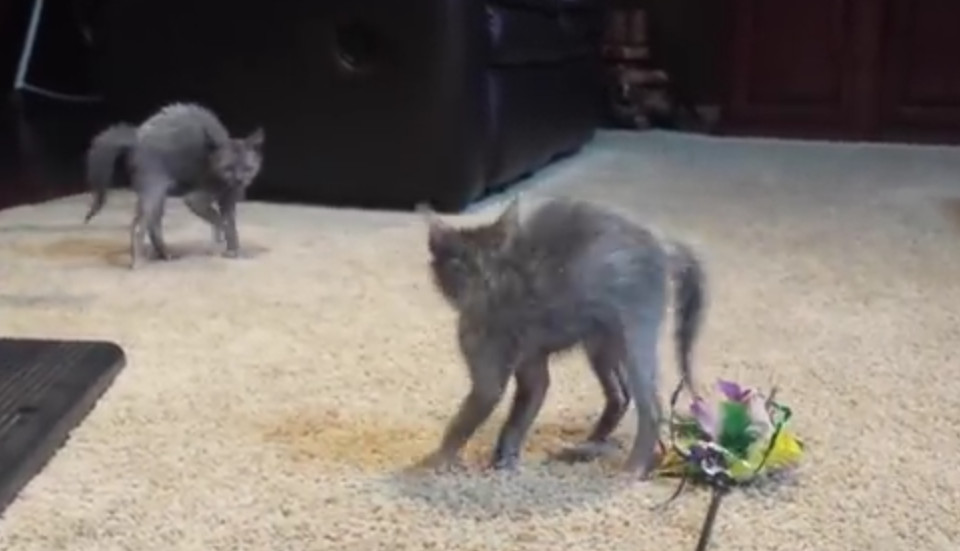 What are Lykoi cats?

Lykoi cats have a unique hair pattern, and at times, they actually molt, unlike other cat breeds, which may shed more heavily in the spring, but don’t actually go through molting. Their name comes from the Greek word for “wolf.” According to Dr. Johnny Gobble, these cats get their distinctive look from a natural genetic mutation that started showing up in domestic shorthair cats about 20 years ago. He’s been breeding Lykoi since roughly 2010.

Lykoi cats actually don’t have an undercoat like other domestic cat breeds, either, and don’t have fur around their eyes or muzzles, either. Dr. Gobble says that these cats are very playful and very loyal, but people are upset because either the cats creep them out, or they think Gobble spliced DNA.

What actually happens with this kind of breeding is when a breeder works to selectively develop a certain characteristic through breeding. Lykoi cats come from selective breeding to develop the mutation that causes their unique look; there was no DNA manipulation or splicing required. There was also no cross-breeding with wild cat species to achieve this – Lykoi cats come entirely from domestic cats.

How were Lykoi cats created?

USA Today says that Lykoi cats have taken the Internet by storm due to their unique look, and that they almost behave like dogs in certain ways. They’re very loyal and they wag their tails when they’re happy. That’s a trait that most cats don’t have. Usually, when you see a cat wagging its tail, it means it’s angry, or nervous.

The kittens that Dr. Gobble used to breed them came from two separate, unrelated litters. These kittens carried the rare genetic mutation that causes the strange fur pattern, and, after testing to be sure that the mutation wasn’t a precursor to some kind of illness or condition that would mean a shorter lifespan and a lower quality of life for the cats, he started working to see if he could turn the mutation into a whole new breed of cat.

Not everyone is thrilled with the existence of Lykoi cats, though. Writing on Care2.com, Susan Bird bristles at the notion that we’ve got yet another designer breed for people to clamor over. Indeed, designer breeds are expensive, and their existence indirectly contributes to shelter crowding, because people buy these cats instead of going to the shelter to adopt.

Bird went on to explain the regrets of Wally Conron, who first bred the Labradoodle. People wanted a dog that had the capabilities of a Labrador retriever, but was also hypoallergenic, and they wanted purebreds. Enter the Labradoodle. Conron says he opened a Pandora’s box, because everyone started trying to breed Labradoodles, but with no consideration for genetics or background. The list of hybrid dogs is nearly endless, and many of these hybrids have serious problems.

The Lykoi isn’t a hybrid, though, so it’s not as likely unscrupulous breeders will just put two cats together and hope they produce Lykoi cats. Selective breeding is much more difficult than cross breeding.

Below is a video of Lykoi kittens playing, giving you a taste of how creepily adorable these striking cats are: