Do your cats sleep with you? I know some of mine do, and it’s usually Chase. Sometimes, I have Chase and Kali, and sometimes I have just Kali. Both of them usually like to sleep near my feet, but every so often, they’ll insist on sleeping in other places, like against my side, or up by my elbows, or on my back. Sometimes, they figure out how to take up an entire king sized bed. 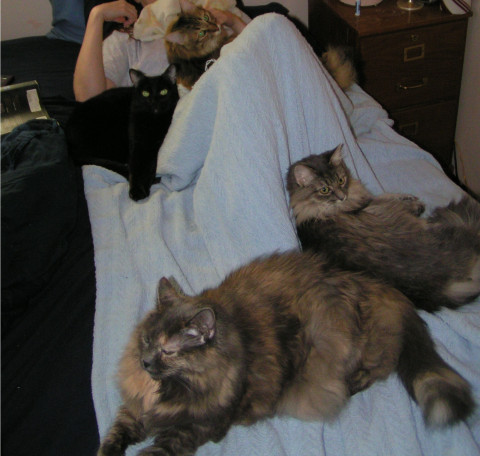 When cats sleep with you, they can force you into all sorts of interesting positions

When cats sleep with you, you’re really, actually, sharing their bed. Not the other way around. There are some positions you have to get used to unless you think you’re going to keep your cats out at night. Now, for some people, that’s possible. For many of us, it means sleepless nights with the cats either banging on the door or meowing loudly and piteously nonstop.

With that said, The Huffington Post has an illustrated article depicting 10 sleeping positions that many of us cat parents know (all too well). I won’t list all of them here, but I will talk about the ones I deal with on a nearly nightly basis.

One of the more common positions, when cats sleep with you, is called “The Creep,” and it’s so named for a reason. “The Creep” is when your cat climbs up on your chest, and stares at you while you’re trying to sleep. It’s creepy, in that adorable way that felines are so capable of.

This is a position I’m very familiar with when it comes to Chase sleeping with me. He’s a wool-sucker – meaning he suckles on fabric, and he likes suckling on blankets when those blankets are on me. He doesn’t keep his face buried in the blanket the whole time. He’ll often let go, and stare at me through slitted eyes while I doze off. I’ve gotten used to this, because he won’t allow anything else.

If you have cats that like to bring you presents, you might end up in this position if your cats sleep with you. Basically, your cat brings absolutely everything he can onto the bed before he goes to sleep between your knees. Shifting position at night is like walking a minefield because of all the objects on your bed, but you can’t move them away because he’ll just bring them back.

Neither Chase nor Kali does this, really, but sleeping with the both of them can constitute a minefield for me. Usually, Chase will stay between my feet, and Kali will sleep against my leg, essentially pinning one of my legs in place. Trying to move without kicking or shoving either of them does feel navigating a minefield.

I am a ridiculously light sleeper, so my husband and I don’t share a bed anymore. When we did, though, and Gizmo slept with us, she often played “marriage counselor.” When your cats sleep with you, and insist on being nowhere but between the two of you, this is the “marriage counselor” position.