Chances are, if you have pets, you also have pets over the Rainbow Bridge. I know I do. Kitty, who was abused as a kitten and extremely defensive when we took her in, and whom I took to live with me after I moved out at 18, went to the Rainbow Bridge in December of 2006. Today is Rainbow Bridge Remembrance Day, and I’m thinking about our little Kitty-girl. 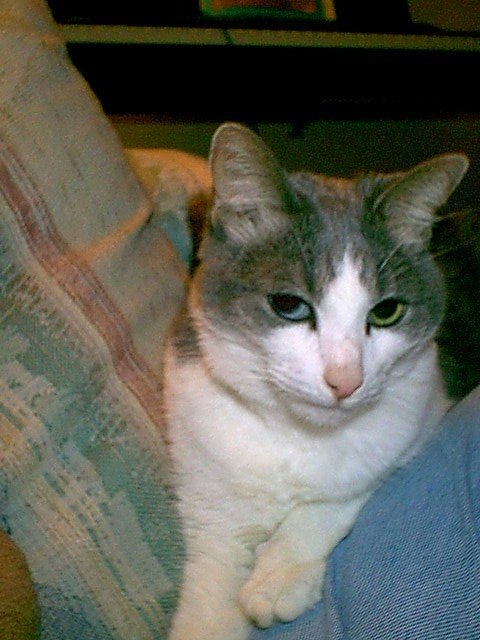 And little she was! She never weighed more than about seven pounds, but she was a stocky little cat. Muscular. Like she worked out so she could always defend herself. We don’t know what all her abusers did to her, but we do know that, at some point, they broke her tail and it healed that way. We could touch her tail, but one touch would usually cause her to tuck it away from us.

Other than that, she was just defensive. Her abusers had said something about her being vicious, and at first glance, it did seem like she was quite vicious. If you took all of her behavior together, though, then a different pictured emerged. Yes, she was prone to biting, scratching, growling and hissing. Yes, she did injure us. But she mostly hid, and only became “vicious” when we were trying to catch her and had her cornered.

She was actually just defending herself. “Vicious” is something else entirely.

Bringing Kitty to live with just me

When I moved out of the house, I lived for a year without a cat and I couldn’t deal. I needed a cat. I’d talked with my dad about bringing Kitty to live with me because we thought she might come out of her shell better if she was the only cat. When I first let her out in my apartment, she disappeared behind the couch. I left her alone, knowing that she’d come out when she was ready.

That night, she woke me up by mewing at me from the floor. She wanted me to watch her eat for some reason – it was almost like she was asking me for permission to eat, and she wouldn’t do it unless I was there. But that didn’t last for very long, and being an only cat, with only one human to deal with, did have the effect we wanted. She began to come out of her shell, and would even seek attention from me. That was something she’d never done before.

She had behavior issues such as stress marking, which I just dealt with because it was to be expected, I felt. She was never going to be anything other than on-edge no matter how quiet things were for her.

That went on for as long as we had her. She would act attention-starved sometimes, and just want to be left alone others. When we started bringing more cats into the house, she did much better than she’d been doing at my dad’s house, possibly because we were bringing cats into her house, and not bringing her into someone else’s house. 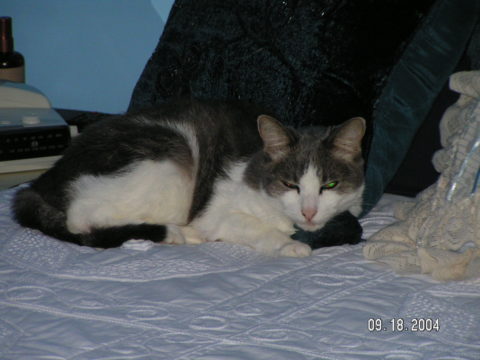 The night that Kitty left for the Rainbow Bridge

In 2006, she was 15 years old, and slowing down. We’d started feeding her wet food only because it seemed she had trouble eating the dry food. One night, I was folding laundry, and she was bouncing around the bed and driving me nuts like she always did when I folded laundry. Later on, she disappeared into the other bedroom and lay down by the heat vent, which was her favorite place to sleep in the winter. She never woke up.

We learned from the vet that she’d had hypertrophic cardiomyopathy, and what had had happened was that her heart could no longer pump enough blood to keep her alive. She went very peacefully – there was no evidence at all that she’d been in any pain. And now she waits for us, along with all the other pets my family has lost, at the Rainbow Bridge.

Sometimes I think she visits me in the middle of the night. I’ll feel the bed shake slightly like it did when she jumped up on it, and I’ll look up, expecting to see a cat. There’s nobody there. So I believe that sometimes, she comes to me from the Rainbow Bridge to say hi, and tell me she’s still watching and waiting.

Do you have a pet at the Rainbow Bridge?

One Reply to “On Rainbow Bridge Remembrance Day – Our Kitty-girl”