I don’t know about you, but my cats aren’t really fans of bath time. They try to cling to us, and they howl so loudly that residents of Idaho can probably hear them. Even the babies, Chase and Kali, whom we had to bathe several times when they were only three weeks old because they had fleas, absolutely hate bath time. But, contrary to my cats, this little kitten loves bath time!

At the time this video was made, Clover was only a few weeks old herself. She looks healthy but scrawny, as growing kittens do. Her person is gently cradling her while passing her back and forth under a faucet of warm water.

The way Clover behaves, it’s almost like the running water reminds her of her mama’s tongue washing her stomach. She paws at the air, and she sticks her tongue out like she’s trying to lap some of the water up. This precious kitten loves bath time so much that it’s like she doesn’t notice her fur is soaked.

According to the video, Clover was getting very messy while learning to eat her food. I have some experience with that, too, because Chase and Kali were always getting messy with their food when they were tiny. After their fleas were gone, we would clean them with a warm washcloth instead of do baths. It was just easier that way. 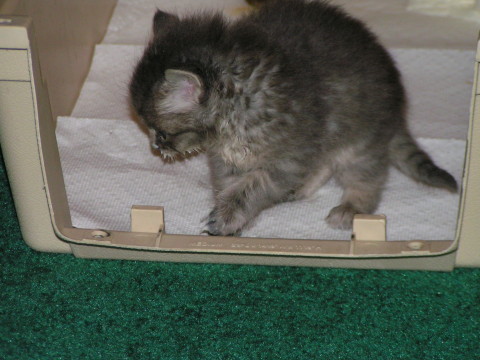 Not every kitten loves bath time, though

Nobody really knows why cats don’t like water, or being bathed. Some speculate that it has to do with where the domestic cat comes from, which is dry African desert. Because of that, they never developed the behaviors necessary to deal with water.

It’s also not always necessary to give cats baths, so if your cat can groom himself properly, isn’t covered in dirt regularly, and doesn’t have fleas or other problems that could require bathing, you may not have to worry about it.

One Reply to “This Adorable Kitten LOVES Bath Time (VIDEO)”