Cat parents often have one major headache, and that’s cleaning up after their cat has urinated outside the box. Even when you catch your cat at it, and clean the spot immediately, you still often have a lingering odor. Worse, if your cat has used one spot, there’s a decent chance he uses other spots, too. Removing cat urine from all those spots is a daunting task.

It’s frustrating. Believe me, I know how frustrating removing cat urine is, especially from carpets. Cat parents often feel that the only option is to replace the soiled carpet and padding or piece of furniture. To add insult to injury, many carpet cleaning manufacturers have “pet” cleaners that are intended to get rid of pet stains and odors. Those rarely seem to work when the odor is cat urine, though. Fortunately, I’ve found a few cleaning products that work well for removing cat urine. 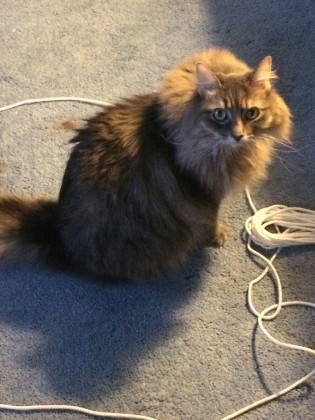 I didn’t know about Urine Away for a really long time. In 2012, we piled all four cats into my car and drove out to my father’s house because of a family emergency. I was out there for nearly seven weeks with them, then we piled them back into the car and drove back home. Before that trip, we hadn’t had much of a problem with our cats urinating outside the litter boxes. Afterward, though, we started having a massive problem with our two most high-strung cats.

I took them to the vet to rule out medical problems. The vet gave me the all-clear, so I tried everything I could think of to stop the behavior and clean it up and get rid of the smell. Nothing worked. After 8 long months, I went back to my vet and asked about fluoxetine. She agreed, and it’s helped a lot, but I still had a ton cleaning to do. I told her I had no idea how to really get rid of all that cat pee.

She told me about Urine Away, which destroys the molecules that cause the distinct odor of cat urine (and has a strong “soapy” odor).

Since the fluoxetine helped Chase and Gizmo stop their marking behavior, I was able to get ahead on their spots. After cleaning, I noticed that they didn’t stop to dig their noses into their spots anymore. They didn’t flinch from the scent, but they didn’t seem to smell the urine anymore. That has been par for the course for well more than a year now.

Urine Away is available on Amazon.com, at Wal-Mart, and elsewhere online in 8 oz and 16 oz bottles, and full gallon jugs.

1-2-3 Odor Free is a cleaning system containing certain bacteria that break down the uric acid crystals that form in and underneath carpet and padding. It’s 100-percent harmless to people and cats.

However, because it’s a system and not a single product, you must use it exactly according to its directions for it to work. Fortunately, the manufacturer believes in educating its customers about how to get rid of pet stains and keep them gone, so they walk you through how to use 1-2-3 Odor Free on different materials and surfaces if you place your order over the phone. The system takes work and effort, but it does work very well.

Psssst, I have a secret: This system requires you to soak an area, and then place a damp terry cloth towel over it and leave it until either the towel is saturated or 24 hours have passed. The damp towel helps to wick out excess urine.

Nature’s Miracle Stain and Odor Remover uses an enzyme that works to destroy not only the urine and stain itself, but also the pheromones left that attract your cat back to the same spot. Nature’s Miracle has a whole line of products for both cats and dogs, and can be found at places like PetSmart and Petco.

If you see your cat urinate on the carpet or you find a fresh urine spot, blot it up as quickly as possible to minimize staining and odor. That will always make removing cat urine easier.

Avoid punishing your cat, however, as that may simply encourage him to do it more. This includes avoiding rubbing his face in his mess and swatting him, or roughly tossing him into the litter box. The last thing you want is to create a negative association with simply urinating when you’re trying to rid your house of existing stains and odors.

If you have something that works that I haven’t listed, please feel free to share it!