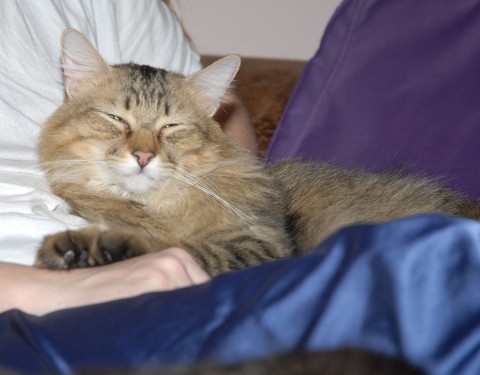 It turns out cats show affection this way because it works

Our cats have learned exactly what they need to do to get certain responses from us. According to Dr. Kathryn Primm, our cats “know they have basic survival needs, like hunger and thirst. They know that we are the source of their resources, so they have become very adept at managing to get people to react in the ways they want.”

So in this way, cats show affection as a means of communication. They’re saying, “Hey, I need something from you.” Just as we learn how to ask people for things in ways that raise our chances of getting it, so too have cats learned this with affection.

Cats show affection to get affection

They don’t just do this when they want food or water, though. Cats show affection to us when they want affection back. Has your cat ever rubbed on you, then led you to his food bowl only for you to see that the bowl is full? Or to his favorite toy, but he doesn’t really seem interested in playing? We have a squillion memes for that kind of thing, but he could be telling you he just wants you to pet him.

So while it may seem like he’s totally selfish in some of his displays of affection, keep in mind that such displays may not be what they seem. Your cats show affection because they need things only you can give, including love.