Most female cats will make good mothers. They’ll feed, wash, and care for their kittens. But what about male cats? Do they make good parents, too, even when they didn’t father the litter? Many of us have at least heard that male lions kill all the cubs they didn’t father when they take over a pride. I’ve sometimes wondered if that extends to other feline species. Can kittens and male cats be good together? 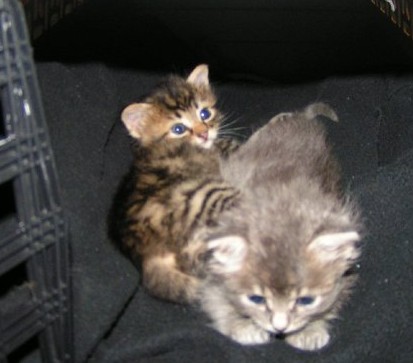 Dianne Meriwether answered that question, which originally appeared in the question form Quora, in a blog post that appeared in The Huffington Post. In it, she said she would have thought that male cats did not make good daddies. Her experience involves a male feral cat that approached their house after her female cat had kittens in the house. She had always heard that male cats eat kittens, so this frightened her. She thought he was after a meal.

What happened, though, surprised her. At first, she held one two-week old kitten up to the screen door, and the male cat responded by rubbing his cheeks on the screen. She finally let him in when the kittens were about four weeks old. He spent time washing each of the kittens, while their mother spent time trying to stay out of their reach. He also taught them to hunt, and fend for themselves. They followed him everywhere.

Male cats can sometimes take over mama’s role in her absence, but it’s wise to be careful with kittens and male cats

The Nest has an article with its own take on whether male cats can make good daddy cats. Author Elle Di Jensen of Demand Media advises people to keep an eye on mothers and their kittens if male cats are around, because they may still pose some danger. She also discusses some anecdotal evidence that male cats have actually shown up at people’s doors with litters of kittens in tow. Kittens wouldn’t follow a cat that threatened them; they’d run and hide.

Other answers to the original question on Quora insist that male cats can’t be good fathers. The bottom line appears to be that there’s no one way to answer this question. So, if you have a new litter of kittens in your household and male cats around, protect them, and perhaps introduce the male cats very slowly when the kittens are older. If the males show any aggression towards the kittens at all, keep them separate.

2 Replies to “Kittens and male cats: Can they be good daddies?”